Behind every boy and man who troops the line for the Cedar Rapids Cadets Drum and Bugle Corps stand his parents in the position of support troops. And this may well be one of the best explanations for the success of the Cadets — now the only drum-and-bugle corps remaining active in the Cedar Rapids area.

Founded in 1928, the corps has had a continuous history and its 30 years make it one of the oldest such organizations in Iowa. 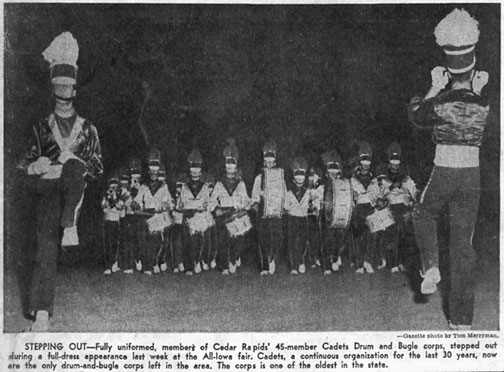 Typical of the spirit which has brought the Cadets 7 national and 2 international awards, in addition to many state and regional honors, is a small sign which stands at the edge of the corps’ practice field and parade ground south of the Memorial stadium on Rockford Rd. SW. The side of the sign facing the road simply identifies the organization people see practicing there.

But on the other side of the sign — the side which the Cadets themselves see most of the time — are the words: “Let’s Be National Champions Again!”

Already the corps is on victory road. Less than 2 weeks ago the Cadets won the junior division of drum-and-bugle corps competition during the American Legion state convention at Des Moines and out-pointed 5 senior corps in the process.

Big event lying ahead will be competition of a national character in Chicago the last week in August.

Earlier this year the Cadets began their summer competition tours by going to Quincy, Ill., and later to Sleepy Eye, Minn. From the latter point came a letter to the Cadets’ secretary: “… You can be assured that we were well satisfied with the conduct of your boys during their short stay with us and wish to extend our congratulations to you and your (adult) group which has assumed the responsibility … for the many appearances that must be made during the course of each year.”

“… Busy youngsters never become delinquents. But it takes a lot of adult effort to keep them busy…”

When Parents Come In

Those who are closely associated with the Cadets speak of the organization in terms of a boy and his parents … Not just the boy. Ask the present directors of the corps or President Lewis Dircks about the parents’ group and they’ll tell you that there’s been one behind the Cadets as long as there has been a corps.

In the 30 years of the corps’ history, an estimated 2,000 boys have come and gone through the ranks. Something less than twice that number of adults — parents of the boys — have been in the parents’ organization and have had a vital part in the support of the corps.

The parents’ group seeks no glory, doesn’t even have a formal name. Organizationally, the parents are a kind of large ways-and-means committee who undertake to meet all problems from seeing to it that their sons get to rehearsals and performances to worrying about paying the bills and keeping the corps solvent.

“I don’t think you can find a better example of ‘togetherness’ in the community than the close relationship between the boys and their parents in this corps,” said one of the adults.

Parents newly associated with the corps learn to “take it” right along with the boys when their sons are disciplined. Knowing discipline is imperative for the good of the corps and trusting in the good judgement of the directors, parents offer no sideline coaching. They are there to help — but not to help direct the corps.

During the summer, when the corps practices and drills on the Rockford Rd. paradeground, you’ll see 25 to 50 cars lined up around the area. Most of them belong to parents who are interested in seeing that the boys get to rehearsals on time and do their best while they’re there. The rest of the cars are filled with the curious who happen to be driving by and just stop to watch and listen.

The Cadets have 3 directors — Vernon Kriz and Jim Westcot, both of whom came into the corps as members in 1937, and Don Mitchell who became a member in 1946. 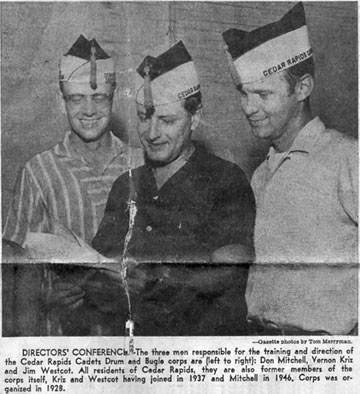 The 3 work closely together in all phases of the training and performance and general administration of the corps, although Westcot is the “bugle man,” Mitchell the drillmaster and Kriz the drum specialist. Kriz is manager of Wisconsin Lumber Company; Mitchell is with Acme Electric and Westcot is engineering department manager at Collins Radio Company.

Because all 3 are “alumni” of the corps ranks themselves they have an unusual rapport in approaching the problems of training and fielding a corps for local appearances or state, regional or national competition.

The corps is worth about $10,000, officials estimated last week. It has that sum invested most of the time in sets of drums and the horns used by the buglers, in uniforms — which were all new in 1957 — in the colors it carries and in accessories.

Instruments must be replaced constantly. Life of a drum used by a corps such as this is estimated at about 7-8 years; for the horns, 5 years.

The Cadets have their year-round base at the YMCA. Some financial assistance comes to the Cadets from both Hanford post of the American Legion and the Tuesday Noon Optimist club. The paradeground use is allowed jointly by the Memorial Commission and the Schoolboard. Lights there belong to the corps.

The Cadets accept recruits to their ranks in an age bracket which has quite a spread: 10 to 21 years. Both trained and wholly untrained recruits are taken. The directors said last week that about 2 years training are required to turn out a drummer capable of performing with the Cadets, about 1 year to produce a bugler.

A constant training program goes on within the corps, both in the matter of musicianship and precision marching.

During the winter months, the Cadets meet about once a week. This schedule increases to as many as 5 or 6 nights a week as the corps approaches the top competition events of the summer season. Last week, counting 2 performances at the All-Iowa fair, the Cadets were busy every day.

Despite the size of the organization, a budget of about $4,500 pays the bills each year. In addition to the organizational support the corps gets, it earns money of its own to defray its expenses by hiring out as a parade organization to county fairs, community celebrations and the like. Counting competitions the corps makes about 25 public appearances a year before as many as 200,000 people.

Only paid staff members of the corps are the 3 directors. All other officials serve as volunteers. 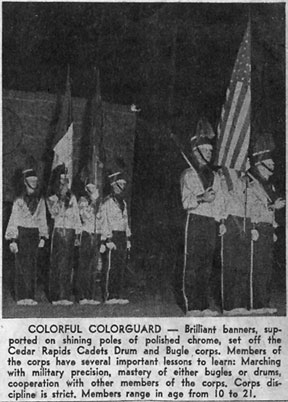 Along with other assets of the corps is one very important one: Loyalty.

Alumni refer to the Cadets as “the old outfit,” as a man would in speaking fondly of the military unit with which he served in wartime. Recently a former corps member sent home a picture of a spit-and-polish marine unit. One face in the line was circled — that of the former Cadet member. On the back of the card the marine wrote: “This is what the Cadets did for me…”

Within the Cadet group the loyalty is strong, too. Cadets deeply resent any evidence that a member is doing anything less than giving his all to the corps. Volunteer drop-outs before heavy competition have occurred because some Cadet admitted “I haven’t been able to attend practices and I wouldn’t want to bring the corps down.”

In competition everything from musicianship to marching, to general effect, to a spot on the drum major’s visor is checked by the judges.

For its background, a drum and bugle corps goes back at least as far as the fife-and-drum-corps units which provided the beat by which military men have marched for centuries … and probably further.

From this kind of unit, according the the musicmen of the Cadets, was evolved the bugle-fife-and-drum unit and finally the drum-and-bugle unit without the fife.

Through the years the instruments themselves have changed remarkably. The bugle of the Cadet corps is a far cry from the old brass one which Granddad carried as a bugler in the Civil war.

Today it’s almost a new science of music — this drum-and-bugle combination — with corps such as the Cadets playing 4 different types of bugles and 3 different kinds of drums.

The buglers, according to Jim Westcot, work with 7-part harmony music and can play the chromatic scale like a piano.

Where the Cadets once played simple melodies, they now work constantly on more difficult ones — because they like to and because the competition in Iowa and nationally is moving in that direction.

Where the formula for a drum and bugle corps once was, for instance, 16 drums and 16 bugles, today it has changed for some corps to a proportion of 40 horns to 4 drums. The Cadets’ leaders, however, say that they prefer a 3-to-1 division of horns to drums — 36 horns, 12 drums.

This, they believe, would give the corps an almost ideal balance.

And an ideal balance — in everything from musicianship to marching — is the goal of the Cedar Rapids Cadets.

Would you like to share your memories of the Cedar Rapids Cadets? Have additions or corrections for the songs or alumni lists? Do you have a photo or article you'd like me to post?

Please e-mail me. I'd love to hear from you! 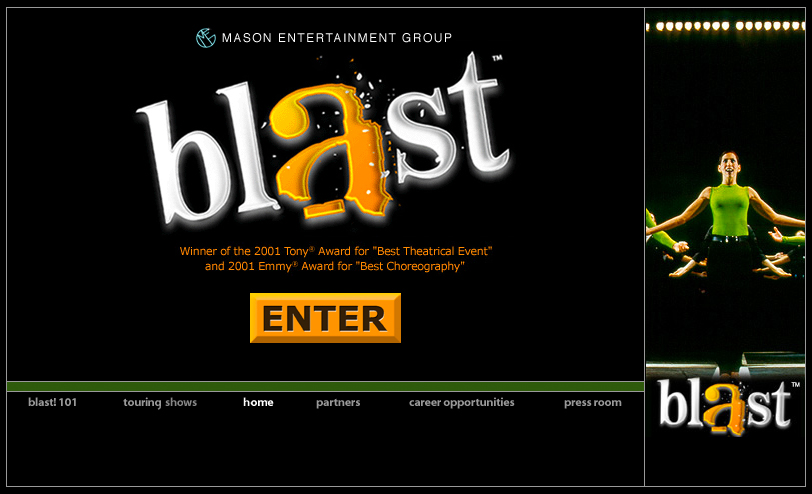 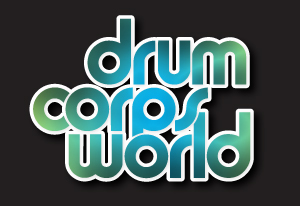